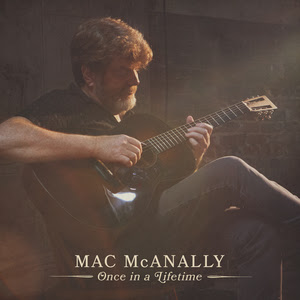 May 22, 2020 - Nashville, TN - “To work with Mac is to work with a master,” boasts country music singer-songwriter, Drake White. Of course, he’s talking about the one and only Mac McAnally; Nashville Songwriters Hall of Fame inductee and ten-time CMA Musician of the Year, not to mention a tenured member of Jimmy Buffett’s Coral Reefer Band. McAnally and White co-wrote “Once in a Lifetime,” the first single from McAnally’s upcoming album of the same title. Out July 31st on Mailboat Records, Once in a Lifetime is a studio reflection of McAnally’s intimate live show in which the all-new material is arranged around mostly guitar and percussion, though a few tracks on the album admittedly outgrew the simple setup. Yesterday, Rolling Stone premiered the title track featuring Drake White, calling it an “uplifting, authentic tune.” “Once in a Lifetime” can be heard here and in rotation on SiriusXM’s Margaritaville (Ch. 24). Pre-orders are available now and include a Once in a Lifetime ballcap and t-shirt. Stream the first single on your favorite platform by following this link.

Once in a Lifetime’s title track came about when McAnally and White saw each other at a local breakfast spot. When White asked if he was enjoying himself these days, McAnally said, “Yeah, every day. Every day is once in a lifetime.” White immediately replied, “We need to get together to write THAT!” Sometimes, McAnally’s songwriting spark is more subtle.

While participating in an art project—novels were given to songwriters and visual artists, who would then create a piece based on their response to the book—McAnally found himself immersed in Harrison Scott Key’s memoir, The World’s Largest Man. “The author came from the same part of the country as me and it woke up a bunch of stuff about my childhood—what it was like hanging with my dad, going to the drugstore, talking about football, politics, and religion,” he says. “That opened up that part of my brain that I haven’t been down into for a while.” Connecting his upbringing in Belmont, Mississippi, with the imagery from The World’s Largest Man led McAnally to write the swaggering, album-opening shuffle, “Alive and in Between.”

Songwriting, though, only fills half of McAnally’s plate. It’s his guitar playing and musicianship that makes Once in a Lifetime feel complete. “All the way back to the beginning, my songwriting has been built around my guitar playing because I’m not a very confident singer,” he says. “I was always trying to make a guitar part sound like a whole arrangement.” A vast majority of the album reflects McAnally’s approach; arrangements based around the guitar with percussion and few auxiliary instruments rounding out each tune. A few notable exceptions are “Just Right,” which was recorded with the Coral Reefer Band in Key West during time off from making a Jimmy Buffett record, and the barn-burning bluegrass feel of “Brand New Broken Heart”—neither of which feel out of place amongst McAnally’s wide-cast net of influences. “I’m interested in all kinds of music,” he says. “There’s obviously some Buffett influence on a few of the things and I’ve been playing country music and gospel music all my life, so there’s that influence, too.”

The thoughtful lyrics and arrangements Once in a Lifetime as a whole can perhaps be traced back to a phrase McAnally remembers from his childhood when his mother would tell him to “make some use of yourself” on his way out the door. McAnally still adheres to that philosophy today. Asked about the experience of listening to these assorted songs that have now become an album, he modestly replies, “I see a guy trying to be a good representation of a human being. I hope there’s something in what I do that in some way can make someone else’s life a little bit better, too. That’s really what I’m shooting for.”

Once in a Lifetime Track Listing:

More About Mac McAnally: With a career spanning five decades, Mac McAnally remains one of Nashville’s most admired songwriters and musicians. A Mississippi native, McAnally earnestly launched his professional career as a teenaged session player in Muscle Shoals, Alabama. Since that time, he has steadily built an international audience as an acclaimed guitarist, prolific songwriter, and engaging performer. In addition to touring as a guitarist in Jimmy Buffett’s Coral Reefer Band, McAnally has written No. 1 country hits for Alabama (“Old Flame”), Kenny Chesney (“Down The Road”), Sawyer Brown (“All These Years”), and more. He is a 10-time recipient of the Country Music Association’s Musician of the Year and a 2007 inductee into the Nashville Songwriters Hall of Fame. His newest album, which he self-produced, is Once in a Lifetime.