Mac McAnally
Once in a Lifetime

For his new album, Once in a Lifetime, Mac McAnally is indeed doing something he’s never done before. To reflect the intimacy of his concerts, he arranged most of the material around guitar and percussion – yet he acknowledges that several of its tracks outgrew that simple set-up. And while many of the songs are new, he chose to include a few originals dating back to the early 2000s that seemed like a good fit.

So, with 12 songs pulled from different decades and musical directions, what ultimately ties all these tracks together? Simply put, it is McAnally’s ability to see the silver lining, a perspective he’s carried on his journey from being a shy, small-town kid from Mississippi, to working as a teenage studio musician in Muscle Shoals, Alabama, to becoming one of Nashville’s most respected (and self-effacing) singer-songwriters. Once in a Lifetime captures every aspect of his musical vision.

“I generally write whatever comes to me,” he says. “I’m not somebody who sits down and says, ‘I need to write a hit song,’ or this or that kind of song. I just follow whatever floats through my head.”

While writing “Alive and in Between,” McAnally drew upon childhood memories of Belmont, Mississippi, where his father was a school administrator and his mother played piano in the Baptist church. The song emerged from an art project, where novels were given to songwriters and visual artists, who would then create a piece based on their response to the book. In McAnally’s case, Harrison Scott Key’s memoir, The World’s Largest Man, sparked vivid snapshots from his own youth. McAnally translated those images into verses, then added a cool guitar riff he’s been using for years while tuning or changing strings.

“The author came from the same part of the country as me and it woke up a bunch of stuff about my childhood – what it was like hanging with my dad, going to the drugstore, talking about football, politics, and religion,” he says. “That opened up that part of my brain that I haven’t been down into for a while.”

One of the most uplifting songs on Once in a Lifetime is “Almost All Good,” where he’s aware of challenging times but doesn’t let them cloud his vision. Propelled by Eric Darken’s percussion, McAnally accompanies himself on guitar – with the lively rhythms adding a joyful spirit to the track. And this is not mere strumming, as McAnally has won a record-setting 10 trophies as Musician of the Year from the Country Music Association.

“All the way back to the beginning, my songwriting has been built around my guitar-playing because I’m not a very confident singer,” he says. “I was always trying to make a guitar part sound like a whole arrangement. There’s usually a bass part as a counterpoint in the main guitar part – but I’m not a fancy guitar player. I don’t take a lot of solos. Part of what’s allowed me to work so long in the business is that of all the bands I was in, I’ve never really wanted a solo. I would sit and play rhythm forever.”

McAnally notes that he typically sees three kinds of people at his shows: Those who have followed his career since his 1977 debut album; those who recognize him as the guitarist in Jimmy Buffett’s Coral Reefer Band; and those who remember his notable credits in country music. The latter category is particularly impressive, with songs cut by Alabama (“Old Flame”), Kenny Chesney (“Back Where I Come From”), Sawyer Brown (“All These Years”), Shenandoah (“Two Dozen Roses”) and many others.

Undoubtedly, Once in a Lifetime will satisfy all of those fans. “First Sign of Trouble” and “That’s Why They Call It Falling” are as quirky and quick-witted as the ‘70s output that made fans of Jimmy Buffett, Randy Newman, and John Prine (all of whom became friends and mentors). “Just Like It Matters” has that lonesome, real-life storytelling of classic country, while “Just Right” keeps the island vibe alive. In fact, it was written and recorded in Key West while Buffett was making his record; the Coral Reefer Band joined in the session, too.

“I’m interested in all kinds of music,” he says. “There’s obviously some Buffett influence on a few of the things and I’ve been playing country music and gospel music all my life, so there’s that influence, too.”

As for the title track, its cheerful message and buoyant melody wouldn’t be out of place on today’s country radio. McAnally and Nashville singer-songwriter Drake White composed it shortly after bumping into each other at a local breakfast spot. They casually chatted about getting together to write. Asked if he was enjoying himself these days, McAnally replied, “Yeah, every day. Every day is once in a lifetime.” White immediately replied, “We need to get together to write THAT!” White lends his vocal to the inspiring track, too.

Turning conversations into song is one of McAnally’s greatest gifts, one that led to his induction into the Nashville Songwriters Hall of Fame in 2007. Two of the songs from Once in a Lifetime come from that era. He co-wrote “Good Guys Win” for the 2006 film, Hoot, and felt like its optimistic tone needed to be heard in this divided time. In addition, the bluegrass-flavored “Brand New Broken Heart” comes from a 2007 demo session of a tune he recorded with his fellow studio musicians, but never got around to pitching.

However, a couple of tracks come from an even earlier time. Co-written and recorded by Jimmy Buffett in 1989, “Changing Channels” is one of the album’s most poetic moments – and a cut that McAnally’s fans have been requesting for decades. Meanwhile, he covers “Norwegian Wood” with just percussion, vocals and octave mandolin, in a sincere homage to the Beatles. “It’s just me celebrating how great they are,” he says.

The thoughtful lyrics of “The Better Part of Living” – and Once in a Lifetime as a whole – can perhaps be traced back to a phrase McAnally remembers from his childhood, when his mother would tell him to “make some use of yourself” on his way out the door. McAnally still adheres to that philosophy today. Asked about the experience of listening to these assorted songs that have now become an album, he modestly replies, “I see a guy trying to be a good representation of a human being. I hope there’s something in what I do that in some way can make someone else’s life a little bit better, too. That’s really what I’m shooting for.” 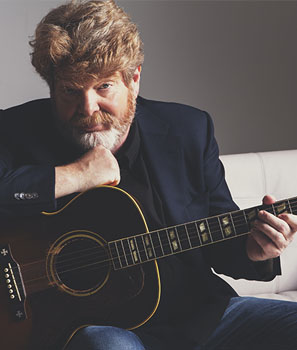